Cervical myofascial pain originates from neck muscle and surrounding fascia and is characterized by the presence of trigger points [hyperirritable areas located in a palpable, taut band of muscle]

Myofascial pain syndrome is said to constitute the largest group of unrecognized and among the most commonly overlooked causes of chronic pain and disability.

Often, the Cervical myofascial pain is described as steady, deep, and aching in quality, although it is not uncommon for patients to use words like burning or crushing.

The pain patterns are not limited to a specific dermatome or peripheral nerve segment. The pain of myofascial origin is essentially a diagnosis of exclusion, as the character of the pain may mimic other cervical pathology.

The muscles most often implicated in cervical myofascial pain are the trapezius, levator scapulae, rhomboids, supraspinatus, and infraspinatus.

Myofascial pain has predominance among women.

Overuse of the muscles by repetitive use of the upper limb or trauma to muscles may lead to cervical myofascial pain. Lack of proper furniture in desk jobs, endocrine dysfunction, chronic infections, nutritional deficiencies, poor posture, and psychological stress may also be responsible.

Cervical myofascial pain may be abrupt in onset (after an injury) or of more gradual onset (from chronic overutilization of muscles).

The patient may give a history of trauma or repetitive activity but cervical myofascial pain can also be associated with poor posture, stress, or cold weather.  Pain in the neck can be associated with a bump in the trapezius or cervical paraspinal muscles.

The pain may be relieved by massage or heat therapy.

The diagnosis of cervical myofascial pain is clinical.  There are no confirmatory laboratory tests available.

However, investigations to rule out any serious conditions may be needed. In the case of trauma cervical, x rays may be done to rule out cervical instability.

Magnetic resonance imaging may be a help to rule out problems in the cervical spine and spinal canal. Common differential diagnoses of cervical myofascial pain are

Myofascial release techniques, massage, cervical stretch, and stabilization are integral parts of this approach. The primary goal of physical therapy is to restore the balance between muscles working as a functional unit. Postural retraining is crucial.

One of the most accepted means of treating myofascial pain besides physical therapy and exercise. The injection is performed most commonly with local anesthetic, although dry needling is equally effective.

This technique is performed using a vapor coolant spray applied to the affected muscle after it has been placed in the passive stretch.

Nonsteroidal anti-inflammatory drugs are the drugs of choice for the initial treatment of myofascial pain. Ibuprofen, Indomethacin, naproxen, diclofenac, and ketoprofen are commonly used drugs.

Gabapentin has been shown to be effective in treating myofascial and neuropathic pain.

With appropriate treatment, the prognosis is generally good. Outcomes is better when treatment is initiated early.
Cervical myofascial pain is a treatable condition if the patient is educated on the condition and takes an active role in the recovery process. However, recurrence is a problem. 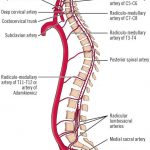 The blood supply of spinal cord is mainly dependent on three vessels. These are namely anterior median longitudinal arterial trunk and a pair of posterolateral trunks. These posterolateral trunks are situated near posterior nerve rootlets. These longitudinal arterial trunks are largest in size in the cervical and lumbar regions because the demand for grey matter […]

Intraoperative blood salvage is a type of autotransfusion or transfusing patient’s own blood instead of allogenic blood retrieved from blood donors. It is also known as autologous blood transfusion or cell salvage. It is a medical procedure involving recovering blood lost during surgery and reinfusing it into the patient. In other words, the blood that […]

Dysplasia spondyloepophysealis congenita is characterized by a short-trunk type of dwarfism with the involvement of the spine and limb epiphyses, … END_OF_DOCUMENT_TOKEN_TO_BE_REPLACED