Both coronoid and olecranon processes also provide stability to humerus by forming anterior and posterior supports by virtue of projections.

While fracture of olecranon is very common, a coronoid fracture is seen less commonly. Fractures of the coronoid process usually reflect severe trauma to the elbow.

Large coronoid fractures often are associated with persistent elbow instability even after reduction of the dislocation.

The brachialis muscle, which was thought to put a force of avulsion, inserts much distally than the tip of the coronoid. However, it is not uncommon to find attached fibers of brachialis in a larger fragment distal to the coronoid process.

When the fragment of coronoid is large, it may cause dislocation of the elbow as the supportive buttress is no longer available [See classification]. But a small coronoid potentially severe trauma with possible acute recurrent dislocation.

The classification was suggested by Regan and Morrey who after a retrospective study, classified the fracture into three types.

Type III—Fracture at the base of the coronoid, likely including the insertions of the brachialis and the anterior band of the medial collateral ligament.

In spite of their type, the presence of a coronoid fracture should evoke concern for acute instability.

AP and lateral views of the elbow are sufficient for most of the cases. In complex injuries of the elbow with concomitant coronoid fracture, CT may be required.

Fracture of the coronoid process are generally not amenable to closed treatment.  Therefore open reduction is almost always the treatment of choice where  the fragment is stabilized using either screw or wire fixation.

Because they are generally associated with elbow instability, open reduction with internal fixation of a significant coronoid fracture often provides the necessary stability to prevent further dislocation.

Operative intervention may also be considered for those fractures that interfere with joint motion. This can occur if the fragment is intraarticular or if it unites proximally and forms a significant bone block to flexion.

After the surgery, the limb is immobilized  for a period of 3 to 4 weeks. Weekly follow up should be done with xray.

After this period , gentle elbow mobilization is begun. 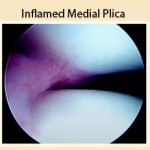 Synovial plica syndrome is referred to the group of signs and symptoms due to inflammatory changes in plica, an otherwise insignificant remnant of the synovial membranes of the knee. Synovial plicae are normal structures found in many knees. Normally, they are asymptomatic and are not associated with any painful conditions. However, with an inciting event […] 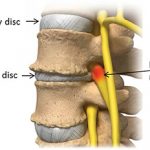 Stress views are special x-ray views in which radiograph of the part examined is done after applying requisite stress. Stress views are important in … END_OF_DOCUMENT_TOKEN_TO_BE_REPLACED