The dorsal scapular nerve entrapment is a relatively less common nerve entrapment that causes shoulder and arm pain. It is vulnerable during brachial plexus injections as the nerve passes through the middle scalene muscle.

Dorsal scapular nerve entrapment is uncommon and therefore frequently underrecognized cause of pain in shoulder and neck area.

The symptoms are easily mistaken for other problems.

The dorsal scapular nerve arises from the brachial plexus, usually from the cervical nerve C5. After leaving C5, it commonly pierces the middle scalene muscle and continues beneath the undersurface of levator scapulae and the rhomboids.

It provides motor innervation to the rhomboid muscles, which pull the scapula towards the spine and levator scapulae muscle, which elevates the scapula.

The course of the nerve is accompanied by one of two arteries: either the dorsal scapular artery that arises from the third part of the subclavian artery or deep branch of the transverse cervical artery [when the other artery is absent].

The rhomboids minor and major muscles connect the medial edge of the scapula to the spinal column. Both rhomboid muscles pull the scapula towards the midline (scapular adduction) and they also pull the scapula superiorly with downward rotation, function opposite to serratus anterior.

Anatomy of Rhomboids and Levator Scapulae 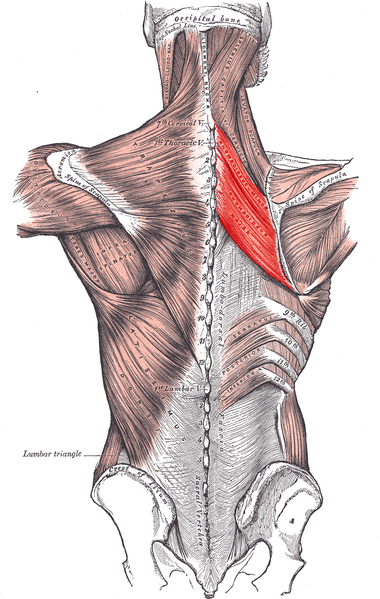 There are two rhomboids are two muscles – rhomboid major & rhomboid minor.
Rhomboid major originates from spinous Processes T2-T5 and inserted on to medial border of scapula from level of the spine to inferior angle

Rhomboid Minor originates from nuchal ligament and spinous Processes C7 & T1. It inserts on a triangular area of the medial end of the medial end of the scapular spine
Both the rhomboids lie deep to trapezius and form parallel bands that pass inferolaterally from the vertebrae to the medial border of the scapula. The two are often separated by a small space between but in some cases, one single blended muscle may be present. [In overhead athletics, a muscle injury to rhomboids may cause rhomboids palsy leading to winging of the scapula and mimicking dorsal scapular nerve entrapement]

Injury/entrapment of dorsal scapular nerve causes weakness of the levator scapulae and the rhomboid muscles and results in a winging of the scapula.

[Scapular winging refers to the abnormal protrusion of scapula on patients back. It occurs because of paralysis of stabilizing muscles of the scapula. Serratus anterior and trapezius are common causes whereas rhomboids weakness is an uncommon cause.

The scapular winging in dorsal scapular nerve syndrome is not as severe as seen with serratus anterior muscle and trapezius.]

The usual complaint in dorsal scapular nerve entrapment is a history of the abnormal movement of the shoulder joint, and stiff joint. The patient may also complain of pain in the shoulder region.

On examination,  as noted before, there could be scapular winging. The scapula may become laterally displaced with an upward motion.

When asked to bring the scapulae together [adduct], the patient is not able to do so or the affected side is less adducted. Palpation of the contracted rhomboideus muscles would confirm the weakness.

When the patient is asked to move the arm forward on elevation will result in the medial border of the scapula being lifted and pulling on the inferior angle of this bone.

An electromyogram would help in confirmation of diagnosis.

Treatment usually is conservative which includes

Surgery can be considered in severe cases that are unresponsive to conservative treatment. 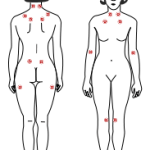 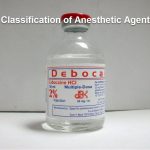 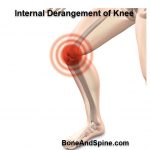 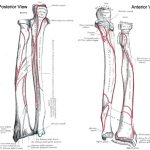