Hip bone is also known as innominate bone or pelvic bone and is formed by the fusion of three bones namely ilium, ischium and pubis bones. Hip bone forms part of the pelvis and takes part in hip joint articulation.

The term hip bone can create confusion in the mind of the reader. To understand better, it is important to differentiate between the hip and pelvis.

The pelvis is a ring-shaped structure formed by two innominate bones on front and side and the sacrum behind.

Hip is a joint formed between femur bone and acetabulum, a cavity in the innominate bone.

The innominate bone which is formed by the fusion of three bones has been called hip bone but actually, it is part of the pelvis [and contributes acetabulum for hip joint.]

The hip bone is made up of the three parts – the ilium, pubis, and ischium. Prior to puberty, a cartilage called the triradiate cartilage separates these individual bones. At the age of 15-17, the three parts begin to fuse.

Their fusion forms a cup-shaped socket known as the acetabulum, which becomes complete at 20-25 years of age. The head of the femur articulates with the acetabulum to form the hip joint.

Hip bones participate in the formation of pelvis along with sacrum as shown below in the diagragm.

Side determination of Hip Bone

The side of the hip bone can be determined by keeping the following features in mind.

We now will discuss the individual bones that fuse to form the hip bone.

Ilium is the largest part of the hip bone and forms expanded plate in the upper part and contributes to acetabulum formation in the lower part.

Roughly two-fifths of the acetabulum is contributed by ilium.

The upper end of the ilium is called iliac crest. The iliac crest is a broad, convex, topmost portion of ilium which can be palpated in the flank area. [Roughly where the trouser belt is the anterior

The lower end is fused with ischium and pubis at the acetabulum.

Ilium has got three borders [anterior, posterior and medial] and three surfaces [gluteal, iliac, and a sacropelvic surface].

Medial Border is on the inner surface of the ilium from the iliac crest to the iliopubic eminence and separates the iliac fossa from the sacropelvic surface. Its lower rounder part forms the iliac part inlet of the pelvis or arcuate line.

The inner surface of the ilium is divided by medial border into iliac fossa and sacropelvic surface.

Iliac fossa is the large concave area on the inner surface of the ilium, situated in front of its medial border. It forms the lateral wall of the false pelvis.

Sacropelvic surface is the uneven area on the inner surface of the ilium, behind its medial border.

It is subdivided in three parts: the iliac tuberosity, auricular surface, and pelvic surface.

The iliac tuberosity is a large rough area below dorsal segment of the iliac crest. It is raised in the middle and depressed both above and below. Articular surface is called auricular surface and articulates with the corresponding auricular surface on sacrum to form sacroiliac joint.

ASIS provides attachment to the inguinal ligament. Sartorius muscle originates from ASIS and area below that.

The dorsal segment of iliac crest has following attachments

Preauricular sulcus provides attachment to lower fibers of the ventral sacroiliac ligament, few fibers of piriformis and upper half of obturator internus.

Pubis forms anteroinferior part of the hip bone contributes to anterior one-fifth of the acetabulum and forms the anterior boundary of the obturator foramen.

It is flattened anteroposteriorly and has a border superiorly called pubic crest which ends in a pubic tubercle laterally. In males, the tubercle is crossed by the spermatic cord.

It has three surfaces

Superior and inferior rami are extensions from the body of the pubis.

Attachments on the Pubis

Medial end of the inguinal ligament and ascending loops of the cremaster muscle.

The pectineal line provides attachment to

The ischium is posteroinferior part of the hip bone and forms two-fifths of the acetabulum and posterior body of the obturator foramen.

Ischium has a body and a ramus.

The body of the ischium is below and behind acetabulum and ends in ischial tuberosity. Its anterior border forms post margin of the obturator foramen.

Dorsal surface of the body of the ischium is continuous with the gluteal surface of the ilium. Piriformis, the sciatic nerve, and the nerve to the quadratus femoris are closely related to this surface. The groove transmits the tendon of the obturator internus.

The surface between anterior and lateral borders is called femoral surface.

Ischial tuberosity has upper and lower areas demarcated by a transverse ridge. An oblique ridge further divides the upper area into a superolateral and inferomedial area. The inferomedial area is covered with fibrofatty tissue which supports body weight in the sitting position.

The lower area of ischial tuberosity is divided into inner and outer areas by a longitudinal ridge.

Ramus of ischium combines with inferior pubic ramus to form conjoined ischiopubic rami which is discussed below.

The inferior ramus of the pubis unites with the ramus of the ischium on the medial side of the obturator foramen. The site of the union may be marked by a localized thickening. The conjoined rami have two borders- upper and lower,  and two surfaces –  outer and inner.
The upper border forms part of the inferior margin of the obturator foramen and lower border forms the pubic arch along with the corresponding border of the bone of the opposite side.

The inner surface is convex and smooth. It is divided into upper middle and lower areas by two ridges.

Attachments on the Ischium

The upper and lower margins of the notch give origin to the superior and inferior gemelli.

Femoral Surface of the Ischium

The acetabulum is formed by

The acetabular fossa is a nonarticular roughened floor of the acetabulum. It contains fat and is lined by synovial membrane.

Obturator foramen is a large gap in the hip bone anteroinferior to the acetabulum, between pubis and ischium. It is large and oval in males, and small and triangular in females. Obturator membrane is attached to its margins, except at the obturator groove, where the obturator vessels and nerve pass out of the pelvis.

The anterior superior iliac spine (ASIS) is an important landmark. Its comparative level with the opposite side is important in spine, pelvis and hip examination. Midway along the inguinal ligament [midway between ASIS and pubic tubercle],  the femoral artery can be palpated.

ASIS also serves as a point for measuring leg lengths.

Hipbone can be injured and trauma and its treatment are dictated by the fracture site, pattern and patient age.

A plaster cast, slab or splint is applied in broken bones of upper or lower extremity. Plaster can be applied for a temporary period while waiting for definitive treatment or it could be definitive treatment in itself. The basic aim of a plaster application is immobilization of the fracture fragments and joints. A plaster could […] 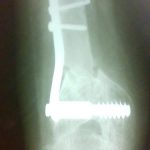