The triphalangeal thumb is a congenital hand anomaly where the thumb has three phalanges instead of two. The middle phalanx is the extra one.

In the normal human hand, the thumb has two phalanges. It is believed to be first described by Columbo in 1559.

The triphalangeal thumb with full-length normal second phalanx and without duplication resembles a finger; when it does not oppose because the thenar muscles are absent, the hand is referred to as a five finger hand.

Triphalangeal thumb is considered a form of pre-axial polydactyly.

The triphalangeal thumb is inherited as an autosomal dominant trait though sporadic cases may occur.

The exact mechanism of the condition is not clear. There is an abnormality of the apical ridge which is a structure formed by the ectodermal cells at the distal end of each limb bud during fetal development. It provides major induction signals during the development of limb for the early growth and differentiation of the limb.

Abnormalities of these inductions can lead to inadequate development. On the preaxial side, these can range from complete thumb aplasia [non-formation] to varying degrees of hypoplasia [abnormal small thumb] to a relatively long triphalangeal thumb lying in the same plane as the fingers.

There is no sex predilection. In about 87 percent of the cases, involvement is bilateral.

The thumb of the contralateral hand may be normal, absent, or duplicated.

The triphalangeal thumb may also be part of a generalized syndrome.

Due to its association with many syndromes and defects, the triphalangeal thumb may have one of the following associations. This is not an exclusive list and only major types of associations are written.

The length of thumb is variable depending on the size of the extra middle phalanx.

The patient may complain of problems arising due to deficient opposition like difficulty with activities like writing, picking up smaller objects. Functionally, fine motor activities such as precision handling are defective.

Thumb may appear like a thumb or like a finger. The first web could be normal or aberrant.  The extra phalanx may be delta-shaped, rectangular, or normal. A small trapezoid second phalanx will cause ulnar angulation.

Failure of opposing the thumb indicates the weakness of the thenar muscles and is of variable degree.

There may be hypermobility at the metacarpophalangeal joint. The carpometacarpal joint can be either hypoplastic or malformed or absent.

In the case of duplication of thumbs [two thumbs], the ulnar thumb is usually better formed.

Rarely, triplication of the thumb is seen and all of these thumbs are underdeveloped.

Routine x-rays would reveal three phalanges instead of two in the involved thumb.

If an extra ray is present, it may be visible as a full ray or with proximally or distally developed parts.

There may be a duplication of a malformed trapezium.

X-rays are good ways to define the shape of the thumb and the status of the whole ray.

The parents may seek correction of the deformity for their children because of the appearance of the thumb or associated functional deficit.

The surgery aims at

Surgery is done at the age of one year generally. In a five-fingered hand with only a slight distal deviation there is no need for an early operation and can be delayed to preschool age.

Different surgical options are as follows

In thumb duplication, when a triphalangeal thumb accompanies a normal thumb, the three phalanxed thumb is ablated.

When the accompanying two-phalanx thumb is hypoplastic but functional, again it is best to ablate the triphalangeal thumb.

When both thumbs have three phalanges and hypoplastic, the more functional of the duplicated thumbs is retained.

Treatment is individualized in each case where wound care and exercises for mobilization are instituted.

The complications of surgery are rare. 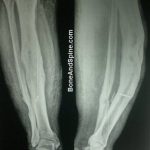 Osteomyelitis literally means inflammation of bone and its marrow regardless of whether it is due to pyogenic organisms, tuberculosis, syphilis, a specific virus, or the presence of a foreign. However, its more accepted meaning is the infection by pyogenic bacteria or less commonly to the other organisms. The infection involves the marrow spaces, the Haversian […]