Iliotibial band syndrome is also called iliotibial friction syndrome is a common cause of lateral knee pain among runners, cyclists and military personnel though it can be observed in other athletes as well. It is considered an overuse syndrome as it is typically is observed in people who exercise vigorously.

The incidence of iliotibial band syndrome in the general is not exactly known. It is estimated that 12% of all running-related overuse injuries, and it is considered to be the most common cause of lateral knee pain in runners.

The iliotibial band assists in:

Errors in training and overuse are the most common factors associated with iliotibial band syndrome.

Following factors are known to be associated

Unequal limb length causes changes in the abduction of the hip during the gait cycle, sacral leveling, and pelvic tilt. This puts increased strain on iliotibial band and tensor fascia lata.

Genu varum is thought to lead to increased stretching of iliotibial band over lateral femoral condyle but there is little empirical support.

A quick note about different types of pronation

Neutral pronation is the normal amount of pronation when the weight distributes fairly evenly among all of the toes with a slight emphasis on the big toe and second toe.

This pattern causes the push-off almost completely from the big toe and second toe. Tibia vara of 10 degrees, forefoot varus, leg length discrepancy, ligamentous laxity, or tight or weak gastrocnemius and soleus muscles have been associated with overpronation of the foot.

The weight of the body isn’t transferred at all to the big toe, forcing the outside of the foot to bear the load.

Weak hip abductors lead to a muscle imbalance. On ground strike, the femur adducts countered by hip abductors. When the hip abductors are weakened or fatigued, runners have increased adduction and internal rotation at midstance causing muscles to attach into the iliotibial band to work harder. This leads to increased tension and injury.

Myofascial restrictions and inflexibility can increase stress in the posterior iliotibial band, particularly with the tensor fascia lata. Tightness in the hip flexors (iliopsoas), extensors (gluteal muscles), and rotators (particularly piriformis) can shift more load to the abductors and adductors.

Though rare, iliotibial band syndrome can be injuries such as anterior cruciate ligament tears or knee contusion.

In cyclists with an external tibia rotation > 20 º, varus knee alignment or active pronation, stress is created on the iliotibial band if the athlete’s cycling shoe is in a straight-ahead position, or the toe is in a cleat position.

When the knee flexes, the iliotibial band moves posteriorly along the lateral femoral epicondyle. Contact against the condyle is highest between 20° and 30° of flexion.

Downhill running and running at slower speeds may exacerbate iliotibial band syndrome as the knee tends to be less flexed at foot strike.

This movement of iliotibial band causes rubbing against the lateral femoral condyle. Another theory says that it is not the friction but compression of the band against a layer of innervated fat between the iliotibial band and epicondyle.

Insidious onset lateral knee pain that is present during running and resolves after running is the most common initial symptom. The continued workout may cause progression, leading to pain during walking and between sessions.

The pain is typically localized about 2 cm above the lateral joint line. Without treatment, the pain may eventually radiate to the distal tibia, calf, and lateral thigh.

Climbing stairs or running downhill or any activity places the knee in a weight-bearing position at about 30º of knee flexion would cause pain.

Pain at rest is usually absent and if present, other pathologies like lateral meniscus tear or cartilage injury, neoplasm, infection, or inflammatory arthropathy should be ruled out.

On examination, there is tenderness 2-4 cm above the lateral joint line and at the Gerdy tubercle. The patient may walk with affected knee extended as to avoid the flexion position that causes pain.

The tightness of the iliotibial band, iliopsoas, rectus femoris, gastrocnemius, and soleus should be looked for. [see tests below]

The pain may be reproduced with knee stressed at 30 degrees flexion. [see tests below]

The following provocative tests may be helpful:

The patient lies on unaffected side with hip flexed to straighten the lumbar lordosis with unaffected limb flexed 90° at the knee. With one hand examiner stabilizes the greater trochanter and with other holds the ankle.

If the thigh remains suspended off the table, this indicates a shortened iliotibial band. Following video illustrates the test.

The patient lies supine with the knee in 90° flexion. The knee is extended passively and pressure is applied on or around the lateral femoral epicondyle. The test is considered positive if there is a pain at about 30° of flexion.

On a footstool, the patient is asked to support all of their weight on the affected leg. Thumb is placed over the lateral femoral condyle and pressure is applied while the patient bends the knee into 30-40° of flexion.

Reproduction of pain with pressure is considered a positive test.

Creak test is similar to the above test [Renee test] but the thumb is not placed on the patient and considered positive when there is a pain on bending the knee.

Thomas test can be used to check restriction in the iliotibial band, hip flexors, and rectus femoris, iliopsoas, and tensor fascia lata.

The patient sits on the end of the table and then rolls back into a supine position, holding both knees to the chest without causing a posterior tilt in pelvis [as guided by examiner]. This flattens the lumbar lordosis if any.

The patient holds the leg of the unaffected hip and slowly lowers the other to the floor.If the patient cannot do 90° of knee flexion, a neutral angle of the hip (if the hip touches the pelvis), or 15° of hip abduction relative to the pelvis, it is considered a positive test.

Lab studies are not required for the diagnosis of iliotibial band syndrome.

Usually, no further imaging is required. In case of difficult diagnosis or conservative treatment, MRI and ultrasonography should be considered.

Ultrasonography is useful in evaluating cystic masses and fluid in the lateral synovial recess. It is able to reveal the dynamic motion of the iliotibial band and the visualization of the impingement.

Principles of treatment are control of inflammation, modification of activity or rest, and correction of underlying problems if present.

After the pain is resolved, flexibility and strengthening exercises for proximal hip musculature are initiated. An athlete can return to full activity when the pain has resolved. If the injury has not been fully rehabilitated before the athlete returns to play, iliotibial band syndrome can become a chronic condition.

If conservative treatment fails, surgery is indicated. A minimum trial of 3 months should be done and all other related factors should be addressed before surgery is considered.

Local corticosteroid injection at the point of maximal tenderness just lateral to the lateral femoral condyle can be tried in patients who do not respond to rest and medication.

The athlete should avoid participating in the activity that incited the injury. Runners should avoid running on banked surfaces or downhill. If one runs on the circular track, running should not be done in the same direction.

If the preceding management of the injury is not successful, consider a period of total rest for 4-6 weeks.

Following the acute phase, after inflammation has subsided, stretching and range of motion exercises are begun and activity level can be gradually increased.

Following muscles should be included in the exercise schedule

Heel lift is advised if a leg-length discrepancy is present. Orthotic devices or modified shoes may help in foot pronation problems.

A too high saddle should be adjusted so that 30-35° of flexion is present at the bottom of the pedaling stroke.

Widening the cyclist’s bike stance by placing spacers between the pedal and the crank arm may help.

Before considering surgery, the physician should investigate other possible sources of lateral knee pain. The typical surgical treatment is open or arthroscopic resection of a small triangular portion of the posterior iliotibial band over the lateral femoral epicondyle and lateral synovial recess.

Other abnormalities such genu valgum which must be considered and addressed if needed.

Active stretching of the iliotibial band should be included in the training. Proximal hip musculature strength should be maintained. The aspects of their training programs that may provoke iliotibial band syndrome (eg, overtraining, running on banked roads)  should be avoided.

Proper equipment should be used for training as well as performance.

Lumbar spine anatomy is unique because it is formed by strong vertebrae. It is unique in being strong and flexible. Lumbar spine provides mobility in many different planes including flexion, extension, side bending, and rotation. Lumbar spine consists of 5 vertebrae linked by joint capsules, flexible ligaments/tendons, and muscles. The lumbar spine is very strong […] 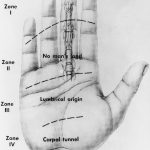 Elbow instability refers to a laxity in the elbow joint that may cause the joint to catch, pop, or slide out of place during certain arm movements. It most often occurs as a result of an injury — typically, an elbow dislocation. The instability associated with elbow injury is called acute elbow instability whereas the […]

Osteoid osteoma is a benign [non-cancerous] osteoblastic tumor. It was first described by Bergstrand 1930 but its unique identity was recognized by Jaffe in 1935. Osteoid osteoma consists of osteoblastic [growing cells] mass called a nidus [very rich in blood supply]. Nidus is surrounded by a zone of sclerotic but otherwise normal bone. It is a […]