It acts as stabilizing the bone, with the radius pivoting to produce the pronation and supination movement of the forearm.

The bone participates in the formation of the elbow joint by articulating with the humerus. Distally, it articulates with the radius, forming the distal radio-ulnar joint.

It is the medial bone of the forearm and is homologous with the fibula of the lower limb. Along with other bone called radius, it connects elbow with the wrist.

The ulna is stabilizing bone of the forearm on which the radius can pronate and supinate for efficient working of the upper limb.

Ulna has upper and lower ends and a  shaft. 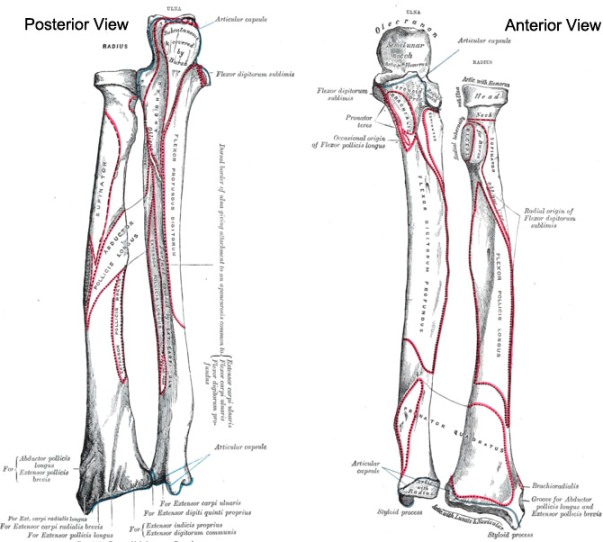 The upper end of ulna presents the olecranon and coronoid processes, and the trochlear and radial notches.

The olecranon process projects upwards from the shaft. It has superior, anterior, posterior, medial and lateral surfaces. The anterior surface is peculiar. It is concave and forms the upper part of the trochlear notch. The posterior surface forms a triangular subcutaneous area which is separated from the skin by a bursa.

Coronoid process projects forwards from the shaft just below the olecranon and has four surfaces, superior, anterior, medial and lateral. The superior surface forms the lower part of the trochlear notch. The anterior surface is triangular and rough. Its lower corner forms the ulnar tuberosity.

The upper part of its lateral surface is marked by the radial notch for the head of the radius.

The lower part of the lateral surface forms a depressed area (to accommodate the radial tuberosity). It is limited behind by a ridge called the supinator crest.

It forms an articular surface that articulates with the trochlea of the humerus to form the elbow joint.

The radial notch articulates with the head of the radius to form the superior radioulnar joint.


The shaft has three borders and three surfaces.

The interosseus (or lateral) border is sharpest in its middle two fourths. Inferiorly it can be traced to the lateral side of the head. Superiorly it is continuous with the supinator crest.

The distal end is much smaller in diameter than the proximal end. It terminates in a rounded head which also has a distal projection – the ulnar styloid process.

The head articulates with the ulnar notch of the radius to form the distal radio-ulnar joint.

Anconeus muscle inserts on the lateral aspect of the olecranon process.

Brachialis muscle inserts on to the interior surface of the coronoid process.

Pronator teres muscle originates from the medial surface on the middle portion of the coronoid process. It shares the origin with medial epicondyle of the humerus.

This muscle takes origin from the olecranon process and posterior surface. It also shares the origin with medial epicondyle of the humerus.

It originates from the distal portion of the anterior ulnar shaft.

It attaches to interosseous border.

Capsular ligament of the elbow joint attaches to the margins of the trochlear notch i.e. coronoid process and olecranon process.

The annular ligament is attached to the anterior and posterior margins of the radial notch.

Ulnar collateral ligament of the wrist attaches to the styloid process.

The articular disc of the inferior radioulnar joint is attached by its apex to a small rough area just lateral to the styloid process.

The Olecranon process gets fractured when a patient falls on a flexed elbow. The triceps brachii can displace part of the fragment proximally.

Dislocation of the elbow occurs when there is a fall on an outstretched hand.

Monteggia’s fracture and Galeazzi’s fracture are other common injuries that involve ulna.

It is a deformation of the distal end of the radius and leads to the dorsal subluxation of the ulna.

Also called myofascial trigger point, the trigger point is a hyperirritable spot in skeletal muscle. Trigger points are associated with palpable nodules in taut bands of muscle fibers. It is believed that palpable nodules are small contraction knots and a common cause of pain. Myofascial pain syndrome is a common painful muscle disorder characterized by […]

Pes anserinus bursitis is an inflammatory condition of Pes-anserinus bursa which lies on the medial aspect of the knee. It causes pain inferomedial to the knee joint. It is also called anserine bursitis. A bursa is a small synovial tissue lined structure between two surfaces which functions to provide space for gliding and reducing friction […]

An ergonomic chair is a chair designed in the way it provides maximum comfort during sitting and properly supports the posture, weight and lumbar while sitting. Though design-wise, ergonomic chairs cater to a range of people, one may need to try more than one model to find a design that suits. Moreover, chairs may not suit every task […] 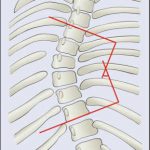 Damage to the spinal cord and subsequent neurological deficit may occur during surgery of the spinal cord. Stagnara wake up test aims at recognizing … END_OF_DOCUMENT_TOKEN_TO_BE_REPLACED